We are Moving to the Morning!

The Slow Food Earth Market, Maitland starts at 8.30am and finishes at 1.30pm on the 1st and 3rd Thursday of every month (in The Levee, Maitland).

Our first market for the year will take place on Thursday, 6th February. Our Facebook posts contain the most up-to-date details about each market. All regular stalls contain produce that is local, seasonal and freshly picked.

What can you expect?

This market offers more than the opportunity to purchase freshly picked produce. It allows you to meet and interact with the people who grow our food, be part of the wider community, and support local growers (all stallholders are local growers) who work hard to keep our food system “good, clean and fair for all”.

Shopping at the markets means you will be buying freshly picked produce that has maximum nutrition and – above all else – you will be supporting local producers who work hard to bring you “good, clean and fair food”.

Where are the markets?

The markets are held in the Levee in Maitland’s main street.

The story so far 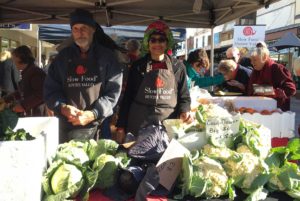 From pop-up stall to a regular market stall to a full-blown Slow Food Earth Market (it has been quite a journey).

We started as a single pop-up stall: In March 2016 Slow Food Hunter Valley (SFHV), with the support of Maitland City Council, instigated a pop-up pumpkin stall in The Levee in Maitland. The purpose of the stall was to reduce food wastage at the farm gate by averting some five acres of pumpkins from being ploughed into the ground.

The pumpkins were a huge success and the public responded immediately and enthusiastically. Some wheeled away entire shopping trolleys full of pumpkins.

The single pop-up stall became a regular event: The success of the pumpkins led to a regular monthly produce stall to be trialled over the ensuing six months. The regular stall was run by SFHV volunteers and backed by Maitland City Council. It was set up outside Millers store and operated from a 3mx3m marquee and a 6mx3m marquee. The larger growers were allocated the larger space while the smaller growers each have a table in the smaller marquee. 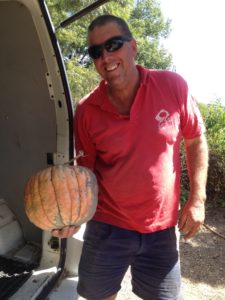 Matt the farmer with his produce.

The objective was to stimulate demand for locally grown, seasonal food to be sold direct to customers from the local area. This aligns with the charter of Slow Food Hunter Valley – to promote good, clean and fair food for all.

The project has been run by Slow Food volunteers and members of the community who volunteer their time. The success of the produce stall resulted in improved economic viability and sustainability for several small-scale producers and farmers in the Maitland area. It received wholehearted support from the local community through their patronage at the produce stall, through volunteering on the stall, and by helping to harvest produce intended for the stall. 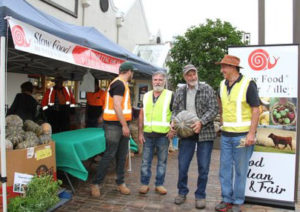 Some of our volunteers and producers.

This initiative was made possible through the formal support of various departments at Maitland City Council and the cooperation of its staff who have been very supportive of this community activity in The Levee. We also had informal support from businesses in The Levee who thought the stall was an excellent idea.

The regular produce stall was held on the 4th Thursday of each month from May through November, 2016. The Memorandum Of Understanding (MOU) between Slow Food Hunter Valley Inc. and Maitland City Council allowed for six events over six months, with a seventh stall held in November (provided the local farmers could provide sufficient produce). There has been an unwavering interest from farmers and volunteers that is sustained by the consistent level of sales to the public, support by local shops and ongoing support by Council.

By November 2016 the stall had attracted ten growers and forty varieties of produce – the most producers and greatest diversity of food of all the stalls. Hours of trading were from 8am to 12noon for the first three stalls and 7am to 12noon for the last four stalls. Anecdotal evidence indicates that a majority of the customers who come to the produce stall will Iinger and support other businesses in The Levee. 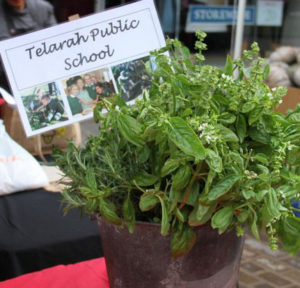 Produce from the Telarah Public School.

The regular stall became a larger produce market (with multiple stalls): Late 2016 and early 2017 was spent negotiating with Maitland Council on creating a larger market with multiple stalls in The Levee. The market started in April 2017 after all logistics were covered off by Maitland Council. The market will run for approximately six months and will be held every second Thursday.

Again we would like to acknowledge the amount of work the Council has done to help create this market – all the time focussing on public safety, making The Levee still accessible to pedestrians and vehicles and ensuring a smooth transition to a larger market.

From a produce market to an Earth Market: On the 3rd August 2017 the produce market “morphed” into a full-blown certified Slow Food Earth Market. This means any fresh food and any produce (such as jams, chutneys and so on) that are sold at the market must be traceable back to local sources. You will be s shopping locally in the truest sense of the word. What’s more any fresh produce sold at the markets must be sold by the grower so you have an opportunity to speak directly to the person who farms your food.

We are very proud to announce that this is Australia’s first ever Slow Food Earth Market. This makes Maitland the first market in Australia to guarantee a 100% adherence to the concept of your food coming direct from “farm gate to dinner plate” on every stall. This is because all stalls are manned by the farmer – and in some cases Slow Food volunteers help the farmer to serve customers.

Stay tuned. This story is not over yet!

We would like to extend a sincere thanks to Starr Partners of Maitland. Without their generosity the logistics of setting up and taking down a market twice a month would not be possible.

The Importance of Local Markets

Why are local markets, such as Maitland’s Slow Food Earth Market, so important?

The reasons seem boundless but let’s just name a few:
We are helping to ensure food security in Australia.
We are ensuring our farmers have a future so they will be here long after we are gone.
We are providing an alternative to food distribution in Australia – a distribution system that currently disadvantages many small producers who farm organically.
It has a major ripple effect across our local community.
It means the produce you  consume is fresh, packed with nutrition and lasts longer (less waste and lower costs to your household).