Running a farm that is completely off the grid may seem impossible but that is what Kelly and Simon have achieved at Little Hill Farm. This 83-acre spread is first and foremost a chicken farm, but a chicken farm with a difference. The carbon footprint seems to be non-existent, or at least so small it would be hard to measure. And yet this is a fully-working chicken farm with complimentary garden produce. 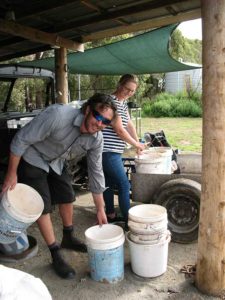 The first thing you notice at Little Hill Farm when you arrive is the lack of any long sheds that you would normally associate with large-scale chicken farming. There is no foul smell on the wind, no large machinery, and no commercial processing equipment. In fact, it takes me a while to realise that the three small mobile pens jutting up from just beyond the rise is where the chickens are housed.

Owned and operated by Kelly Eaton and Simon Carroll, the farm is a reflection of Kelly and Simon’s beliefs. Kelly explains that “animals destined for human consumption do not need to be raised in confined or unnatural conditions.”

All the birds on Little Hill Farm are pasture-raised. Simon and Kelly are at pains to point out that this is different to free-range. Since March 2016, new laws allow farms with 10,000 birds (or less) per hectare to classify themselves as “free range”, as long as the birds have “meaningful access” to outdoor paddocks. For a farm carrying 10,000 birds, this equates to a square metre of land per bird. The production system at Little Hill Farm sits in direct contrast to this. 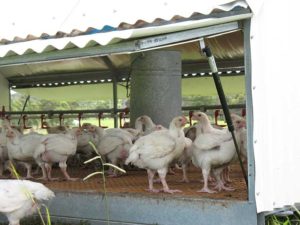 The pasture-raised birds are moved around on a rotational basis, roam freely (overseen by maremma dogs), and are certainly not confined to a given area of land. In fact, the number of chickens on the farm is deceiving.

As I arrive at the farm Simon is busy making Chicken Pen Mark VII. Adjusting the design of the pens is Simon’s way of continually striving to improve the living conditions of the animals while gaining efficiency on the farm (efficiency does not come at the cost of the animal’s welfare). To one side of the farmhouse a large mobile pen (one of Simon’s creations) is used for the egg-producing birds (the layers). The pen is on wheels and is frequently moved around by tractor. In front of the farmhouse (just over the rise), three smaller mobile pens (also made by Simon) are used for the meat birds. These are systematically rotated with a view to not only moving the chickens but to also use the chickens to add nutrients to the soil in an even and consistent manner. This means the rotation of the chicken pens is clearly by design and not a random activity. 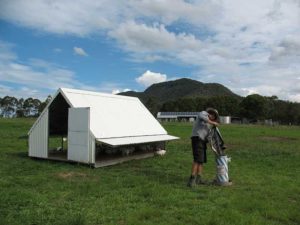 At feeding time I head out with Simon to feed the chickens and collect eggs. Feeding involves giving the birds a wholegrain mix. It is medication-free and contains grit (tiny rocks) that aids in digestion by grinding food as it passes through the gizzard. The grinding of food is important because it increases the nutrients the birds extract from the food. The inclusion of a wholegrain mix in the chicken’s diet has also eliminated lame birds – a common problem in many chicken farms that results in the problem-bird having to be culled.

After the meat birds are fed, we head off to feed the chickens at the large pen where the layers are housed. This way we increase our efficiency by feeding and collecting eggs. This is not an unskilled task – as I find out from Simon. For reasons of efficiency Simon instructs me on how to lay down an empty tray with the handles pointing in the right direction (left to right, not front to back). You have to pick up eggs four at a time using both hands. It is important to fill two trays as you go. Then the full trays have to be moved and stacked in a way that minimises breakages as they are transported to the cleaning room. Under Simon’s strict instructions, this was much more stressful than I had envisaged but I think I did a good job and lived up to Simon’s expectations – with only one cracked egg amongst the many dozen I collected and stacked (whew!). 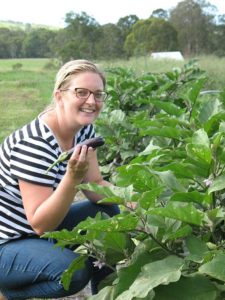 When you buy eggs that are produced with such humanity, where the animal is treated with respect and dignity, where they can live a free and natural life, you realise why there is a price difference between the produce from places like Little Hill Farm and the produce from highly mechanised and industrialised methods. “People ask us why the eggs are so expensive” said Kelly, “but they are handled so many times.” The eggs are collected, candled [passed over a light to check for cracks], cleaned, weighed, stamped, packed and delivered – all by hand. All the while, the animals producing these eggs are treated with dignity and respect.

To increase the biodiversity in their flock, Little Hill Farm now stocks Sommerlad Heritage Chickens as part of their meat-bird range. These birds have been bred in Australia (in Tenterfield), are slower growing, cope better outdoors and have a greater genetic diversity than their modern, faster-growing alternatives (which are bred to be raised in huge sheds, do not fare as well outdoors and have less genetic diversity). As a slower growing bird, the Sommerlad has better foraging characteristics which equates to more flavor in the meat. They are also pinker in colour when cooked. “People will see a variation in the meat colour.” says Simon.

To compliment the eggs and chicken, Kelly and Simon have planted out three large organic garden plots for commercial production. The garden plots, on their own, appear to be a full time job without raising and caring for pasture-raised meat and egg birds. In the garden Kelly plants out a few staples – including a range of salad greens – and then maintains her enthusiasm by planting whatever is in season and takes her fancy. 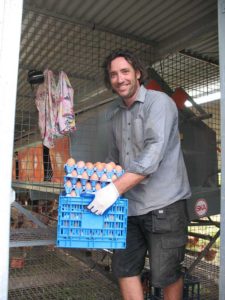 Selling business-to-business and direct to the public (including pre-arranged gate to plate sales), Kelly and Simon are making a name for hemselves in some of our best restaurants and cafes across the Valley – from Newcastle to Pokolbin. Apothecary Kitchen in Newcastle, for example, is running a number of cooking classes using Little Hill Farm birds.

Complimenting the sustainable approach to farming is the fact that the farm is completely off the grid. The farm is fully self-sufficient through features such as rainwater and a 9kWh solar system that powers the entire operation including workshop, cleaning shed, fridges and freezers. Even some of the smaller mechanised activities that Simon has implemented are solar-driven.

But this has not been an easy road for Kelly and Simon. In the warmer months a single pen of meat birds can use between 100 and 200 litres of water a day. With three pens, this equates to up to 600 litres of water a day. While the watering system for the chickens is now gravity-fed, Kelly and Simon used to cart water by hand when the farm was just starting out. Kelly says “I see other farms where they have everything in place – they have everything down pat, but they are fourth and fifth generation farmers. We’re first generation farmers and we’re still building our business so we are still working on things.”

As a visitor (an outsider looking in), I find the achievements inspiring. It is hard to believe that in less than three and a half years Kelly and Simon have achieved so much. Between Simon’s inventiveness (he is as inventive as any farmer I have ever met – and I have met many), Kelly’s enthusiasm, their hard work and youthful energy, the possibilities seem limitless.

If you are “Living in the Ark” (protecting even the smallest corner of our edible foods by maintaining heirloom plants or heritage stock, or working to protect the diversity of our living planet), we would like to hear from you. Please complete the Contact Us form with a brief description of your work and we will contact you soon. Whether you are a home gardener, small-scale farmer, activist, or just a “friend of nature”, drop us a line.

Previous Living in the Ark articles, are archived and available as pdfs. Please see the sidebar (on the right) or visit our Publications page.

Previous Living in the Ark stories are reformatted and saved as PDFs.

Biodiversity at our Doorstep (Apr 2016) - Austin and Laurel Breiner regenerated a once destitute piece of land on the outskirts of Maitland.
Davidson's Plum (Nov 2015) LIz Griffiths is using a back yard in Telarah to help keep Australia's food sources alive.