The conference offers an unprecedented learning experience, a highly concentrated display of international produce, and an incredible insight into what chefs and small-scale farmers are doing around the globe to keep our food system “good, clean and fair for all”.

Each winner will receive full airfare, accommodations and conference fees (worth $2500) for the biennial Slow Food International convention in Turin, Italy, 20-24 September, 2018. The three scholarship winners will accompany the Australia Slow Food delegation to the international Slow Food convention, which is held in even numbered years in Turin, Italy.  More than 7,000 Slow Food delegates from 143 countries attend this convention, which includes the Salone del Gusto, an international showcase of regional foods featuring 900 exhibitors from over 100 countries.  The Salone del Gusto is open to the pubic and attracted nearly 1 million people over the four-day event in 2016.

Leisha Parkinson, owner of Bean Cycled, is the winner of the Young Farmer Scholarship. Leisha farms oyster mushroom that are unlike any other. Using recycled coffee grounds as the growing medium, Leisha farms without soil or land. Her creative approach to farming her high-end product is both creative and admirable. Based in Charlestown Square (yes that’s right – a shopping centre) Leisha says that they “don’t harm the environment” with their farming practises, are growing chemical-free, and are even doing their best to improve the environment by diverting hundreds of kilos of spent coffee grounds each week into a highly productive use. These coffee grounds would normally go to landfill where they would produce harmful methane and greenhouse gases. Just as impressive is the fact that Bean Cycled does not need high energy resources to sterlise the growing base because it is already pasturised from the coffee brewing process.

Leisha is particularly proud of the fact that her farming practises “do no harm to our environment”. She says, “we only have one planet and we haven’t been looking after it. Our industry is one where we can make changes to do this, and still deliver great products. I also think we have become a world of convenience and instant gratification but Slow Food is really connecting people back to real food as well as the people that produce it which I love.”

The oyster mushroom farm has been some time in the making. After sitting with the idea for several years, Leisha and her brother finally made her first foray into the farming business some 18 months ago when she decided to take 6 months off to set up the mushroom farm in Charlestown Square with her brother.

She had researched and conducted various small-scale tests on growing oyster mushrooms on recycled coffee grounds and been quite successful. From there she pitched to Charlestown Square as a mutual beneficial arrangement where coffee grounds could be recycled on site instead of having them go to landfill and she was pleasantly surprised when they agreed. “We then fitted out storage rooms in the centre and built a fruiting room in one of their docks. We commenced production in March 2017 with our first crop coming through in late May. Scaling up to a business has been quite challenging but we’ve since been able to drastically reduce our incubation period and made other improvements. In October 2017 we attended our first market, offering our grow-at-home kits. We’re now offering these kits as fundraisers for schools and community groups as well as continue to provide fresh mushrooms to local restaurants and cafes. We’ve recently started working with Your Food Collective to be able to offer our fresh mushrooms to the public as well.

The Hunter Valley chef, Thomas Boyd, is the winner of the chef’s Scholarship. Thomas is currently Head Chef at Margan Restaurant (located at the Margan Winery, Broke). Thomas has spent almost his entire career in and around the Hunter – aside from 18 months at The Ledbury in Notting Hill, London, UK. Whether working locally or overseas, his passion for local produce has not waned. As a person who grerw up in the Hunter Valley Thomas says “I am very proud of this region and the intitiatives that have been established with the Slow Food movement. I would be honoured to be an ambasdor for the Slow Food movement and represent the community. It is important that our community is educated on ‘good, clean and fair’ food sources.”

Regarding his trip to Terra Madre, Thomas says he is “keen to network and learn more about sustainable practices and ways I can apply it to my kitchen. I am feeling a great responsibility to educate our guests and more importantly the next generation of chefs and I feel this will give me a grerat voice. This industry is always evolving and it is essential we keep learning and inspiring each other and I hope to return from Terra Madre to share my experiene with my local community.”

To supply the restaurant, Margan grows about 90 percent of its produce on a one-acre farm on site, makes its own haloumi and ricotta from milk bought at local dairies and develops menus based on seasonal produce. This shift towards a paddock-to-plate dining experience is growing and connects the chef directly with the growing seasons. It means Thomas works closely with the gardener to understand what is being planted and when things will be ready for harvest. It also means the restaurant must adapt and change regularly to account for seasonal changes and to mother nature. If a crop fails because of drought or inclement weather, they have to adjust their menu accordingly.

Liam Dennis grew up farming with his family in East Maitland.  He now co-manages the family farm and can usually be found at his produce stall at Maitland’s Earth Market on the first and third Thursday of the month. In the last two years Liam’s farming practises have changed dramatically. He cultivates a broader range of crops to ensure greater biodiversity and has moved to natural farming methods.

Liam is currently undertaking a Parks and Gardens apprenticeship (in the absence of being able to find a local horticulture course that suited him). As Liam’s interest in biodiversity and local produce grows he is considering setting up a seed bank where local growers can exchange seeds and transfer knowledge about what they grow. Liam says the scholarship will help him understand “how Europe grows its fresh produce and how the mixed farming works”. He’d like to bring that knowledge back to Australia “and put it to use by trying different ways to farm here in Australia rather then the way we do things now”.

Liam also says he will be able to learn about different fruit and vegetables around the world and learn different ways to farm so he can bring fresh produce to the community. “I would learn about new crops that I might not have ever seen or heard of before. I’d meet new people and learn how they farm and where they farm in the world.”

This placement has been awarded to Belinda-Jane Davis, Journalist, Fairfax Media, in recognition of her inspiring work for farmers and local producers – including here work with “Feeding the Future”, “The Food Revolution” and the “Big Dry”. It would be difficult to find a greater advocate for local farmers.

s a small-scale garlic farmer from Marshdale (near Dungog, NSW) Tom was keen meet other farmers who espoused the ‘slow food’ philosophy. After several years of co-operative farming, Tom (and his wife) produced their first crop on their own land in 2016.

Tom and his wife Dominique Northam – who are passionate about food production – use organic farming methods. They sell directly through farmer’s markets in both Newcastle and Dungog. Tom said he savours “the interaction with other producers in Dungog” when the farmer’s markets are on and “is always adding to his knowledge bank” with every interaction. Tom also thinks the connection between grower and buyer is an important one and sits well with the concepts he studied in his Philosophy degree.

Tom has been part of a food co-op, studied permaculture, and completed courses with Curtis Stone and Jean-Martin Foractier in Sydney. “I love the ethos of the Slow Food movement  – good, clean and fair food production that doesn’t harm the environment,” he said. “And thanks to the Hunter Valley Slow Food scholarship I will be able to meet people at the Terra Madre conference from around the world who believe in that same farming philosophy. Exchanging ideas will be great.”

Tom has gone from a keen gardener living in Newcastle to planting our some 10,000 garlic plants at Four Acre Farm and the joy of growing slow food keeps him very motivated. 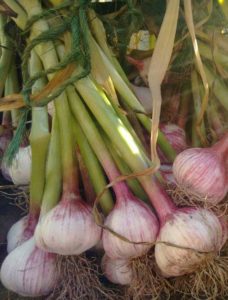